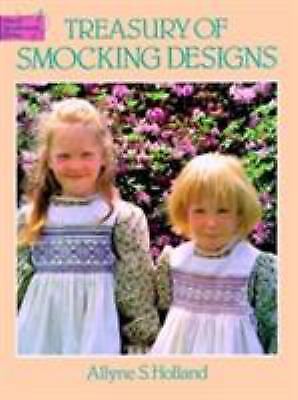 Although you can find some contemporary smocking patterns, most smocking has an air of nostalgia about it. Smocking is the art of embroidering designs or pictures on pleated fabric. You're most likely to see it on christening gowns and baby garments, special occasion clothing for small children (especially girls’ dresses), and on modest nightgowns for women. Smocking supplies are only available at specialized smocking and heritage sewing stores.

Why should you buy vintage smocking patterns?

Smocking patterns are often designed with an heirloom aura that doesn’t age. You don’t have to worry about vintage patterns being out-of-date. Since most smocking patterns are published by small companies and not widely distributed, one place to look for pattern booklets is on eBay.

What project do most smockers begin with?

Almost every smocker begins with a sampler. Even if you‘re an accomplished embroiderer, you’ll have a lot to learn when you begin to smock. Since beginners don’t normally own pleating machines, you’ll need iron-on pleating dots to help you with hand pleating the fabric. A less desirable alternative is using your sewing machine to gather the fabric.

What are some highly regarded names in smocking patterns?

As mentioned above, many pattern booklets and plates were published by small companies and independent designers. Some names to look for are Ellen McCarn, Pat Garretson, and The Children’s Corner. Don’t overlook smocking magazines, which often include full-sized single patterns and iron-on transfers. There are many back issues for sale. Australian Smocking and Embroidery Magazine should be available, too. An American magazine which recently ceased publication, Sew Beautiful, is a good choice if you are interested in imitating fine hand construction of garments by machine. Many issues also include patterns for smocking and other kinds of hand embroidery.

Content provided for informational purposes only. eBay is not affiliated with or endorsed by Ellen McCarn, Pat Garretson, The Children's Corner, Australian Smocking and Embroidery Magazine, or Sew Beautiful.