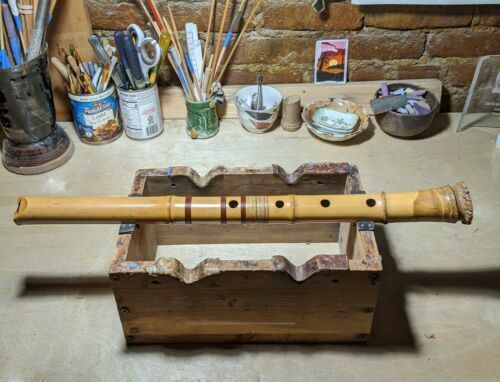 Make the Music of Your Dreams With a Shakuhachi Flute

The shakuhachi is a type of traditional woodwind instrument that dates back hundreds of years. While initially created in China, it is most commonly associated with Japanese music. Its deceptively simple appearance hides just how haunting and magical its music can sound.

What is a shakuhachi made out of?

The shakuhachi is typically made from bamboo; the natural hollowness, sturdiness, and cylindrical shape of a bamboo stalk make it ideal for forging into a flute. The inherent asymmetry of the material gives each flute a unique quality to its sound that cant be replicated by any other piece. In terms of length, most of these musical instruments are exactly 54.54 centimeters or just under 2 feet long. This coincides with the name "shakuhachi," which translates to "eight shaku." The shaku is an ancient unit of measurement thats roughly equal to 30.3 centimeters. More contemporary designs might instead be made out of glass, synthetic materials, and various types of hardwood. Multiple materials can give the instrument different tonal qualities. This makes the material one of several important factors to consider when purchasing a shakuhachi from eBay.

How the shakuhachi is played

As a type of flute, the shakuhachi is played by turning air into music. A musician will produce notes by blowing into one end, called the blowing edge, and covering a series of five holes: four on the front, one on the back. The holes can be partially covered, covered in groups, quickly covered and uncovered, or struck to amplify further the range of notes produced. Typically, a shakuhachi is tuned to the minor pentatonic scale.

What kind of music is played on a shakuhachi?

Unlike many instruments, the affordable shakuhachi is often played solo with no accompaniment beyond a taiko drum, at most. Its unique and powerful sound and wide range of notes available lend it the presence and volume to stand on its own. That being said, it can often be found in:

How different is one shakuhachi from another?

While shakuhachi makers naturally strive to have a level of consistency between the music of different instruments, the fact that each must be handmade with great care means that no two specimens will ever sound exactly the same. The extremely long and thorough production process takes around a decade to complete, making each one a highly personalized tool for the musician who owns it. This does not necessarily apply to inexpensive shakuhachi made from a material like plastic or hardwood because those can be mass-produced to a factory standard.