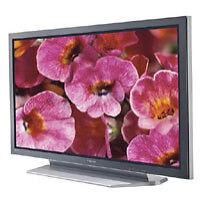 How to Find the Right Plasma TV

A plasma TV is a set that features a plasma screen and they are usually large in design. These TV sets are quite thin in their appearance and due to this they work well mounting on the wall or standing on a display cabinet. Samsung makes a wide selection of plasma televisions and many within the 50 to 60-inch range and were also responsible for launching the first ever plasma TV in 1998. Production of these TVs and the plasma technology has effectively ceased as of 2014 and the brand instead focuses on LCD and LED models, but there are still some available in new and used condition.

What Features Are Found on Samsung Plasma TVs?

When youre after a new HDTV, the features that youll find most important will depend on what youre using the set for. Those interested in gaming will want better picture performance whereas people who use them to view other media might be interested in HDMI and USB ports. These are some of the features that are available on previously released Samsung plasma sets.

What Condition Are the TVs In?

Whether youre trying to fix a broken TV and need parts from another device or just want to invest in a new TV for your home, there are varying conditions that you can find them in. Depending on their quality and age, these are some of the possible conditions you will find the plasma HDTV in:

Content provided for informational purposes only.  eBay is not affiliated with or endorsed by Samsung.