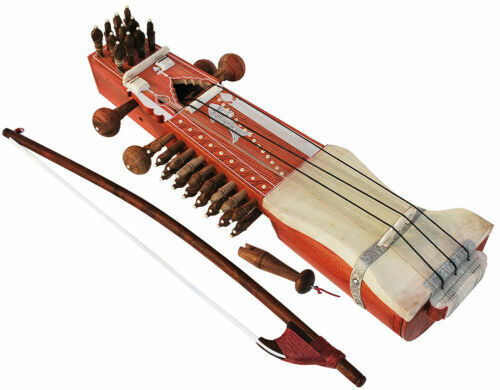 A rebab is a bowed, spike-lute chordophone from Java, Indonesia, but it originated in the Muslim culture. It is used in Indonesian orchestra music and has traditionally been played by males. It requires extensive training and is one of only a few instruments females are allowed to use.

How is a rebab made?

A traditional rebab is a two-stringed fiddle with a heart-shaped wooden body. The body is covered by a thin layer of skin made of buffalo intestines, and the strings are usually made of copper. The two strings are really one long copper string that is wound around the bottom of the stick and extends to two pegs at the top of the stick. The tuning pegs are fragile and break if not held next to the neck of the instrument. The strings cross a wide wooden bridge, and a wooden bow with horsehair is used to sound the strings. Some of the earliest instruments were made of ivory to signify the status of the owner.

The player sits cross-legged on the floor and uses an upward-facing palm to hold the bow in the right hand, and the third and fourth fingers pull the hair to create tension. The rebab is held vertically or slightly tilted forward. There is no fingerboard. The player brushes his fingers lightly across the strings, avoiding touching the neck with the string. The instrument produces a relatively loud sound but does not have a fixed pitch. It is also quite difficult to play. Rebab players are highly trained and respected in the world of gamelan music, a traditional Indonesian genre that uses an assortment of bronze percussion instruments.

What materials are used to build rebabs?

The primary supplies needed to make an Afghan rebab are horsehair, wood, mammal skin, wire string, and animal intestines. Finely detailed instruments include those made of mulberry wood with inlaid lapis and nacre-pearl, hand-carved teak, and other hand-carved exotic woods and inlays. Rebabs are not indigenous to Java and likely originated in Persian or Arabic countries where bowed chordophones with skins are common. The eBay website features exquisitely made antique models that are not only musical instruments but also works of art. More recently, instruments are built in Northern India.

Dimensions of a typical rebab

The following dimensions are typical of authentic rebabs:

What are some features of the rebab?

The instrument falls into the musical category of chordophones or spike bowl lutes, instruments in which the resonator is made up a handle or neck that passes through a carved bowl. In addition to the spike fiddle, there is also a lesser-known version with a pear-shaped body similar to a Byzantine Lyra. The traditional spike fiddle has the following features: