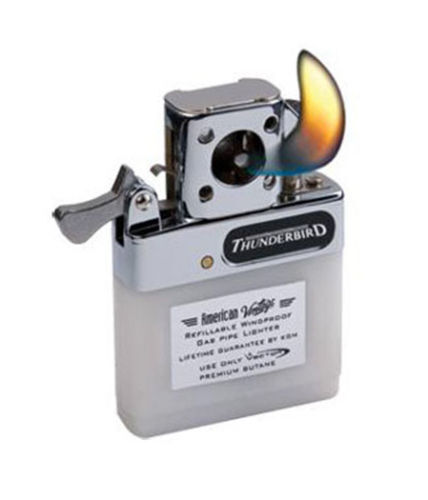 Understanding the different types of collectible lighters available helps people in the decision-making process. Many of the original cigarette lighters were produced in 1850, making them vintage now, and the industry has changed very little since Cricket introduced their first disposable vintage cigarette lighter in 1961.

What are percussion cigarette lighters?

Around 1850, the first percussion cigar lighters were manufactured with many attaching directly to cigar pipes. These worked by igniting caps on a cardboard disc setting a fuse on fire. After finding initial success as a pipe lighter, the idea was used to make vintage lighters like the Magic Pocket Lamp.

What are fuse-cord cigarette lighters?

Another style of antique lighter was the fuse-cord vintage cigarette lighter that worked by striking a flint to start a cord on fire. While the first ones were manufactured in the late 1880s, they were especially valued during World War I because the burning cord allowed soldiers to light their cigarettes without giving away their location like using an open flame would have done. This style of collectible lighter was prominent until the 1940s, with many successors being prized for their detailed illustrations on their covers. Most came with a glass vial containing up to 16 flints.

What are catalytic collectible lighters?

Various manufacturers toyed with making catalytic lighters since the early 1900s. These vintage lighters used menthol, which could be extremely volatile. Catalytic lighters, like the GloLite, Jiffy-Lite, Master-Lite, and New Menthol models, worked simply by removing the cap, causing a platinum catalyst to light up, which ignited a menthol flame. Models produced in Germany between World War I and II are often found in collections.

What are semi-automatic collectible lighters?

Semi-automatic lighters worked by pushing a button that caused a flint wheel to move and produce a flame. Art Metal Works marketed the Banjo as the first automatic lighter, and they released a commemorative model in the 1990s that is also prized by collectors.

What are vintage butane lighters?

Butane lighters were originally designed to sit on a table, like the Gentry model. They became available in pocket size with the Crillion from the Flaminaire Company, and those made by the Parker Pen Company are highly valued collectibles as well.

How do you start collecting vintage lighters?

The first step in collecting vintage lighters is to decide where you would like to focus your collection. Some people collect vintage antique cigarette lighters: