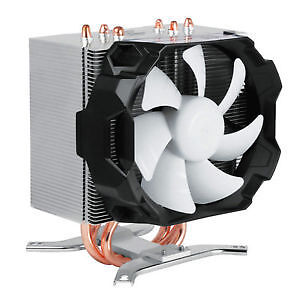 Whether you are building a new computer, replacing a few parts or upgrading for a particular use, personalizing your system is a great way to boost performance. Intel CPUs are known for their power, and the associated parts can be expected to perform well. Learn more about LGA 1155 CPU fans with heatsinks here.

What does a heatsink do?

The heatsink is one of the most important components of a computer. It is specifically designed to help dissipate heat that builds up on the CPU. Without a heatsink to use as an Intel CPU cooler, processors would only be able to run at a small fraction of their capacity. The sink works by creating a passive heat exchange. The metal design of the sink (similar to that of a radiator on a car) draws heat buildup away from the processing unit and to the fan. The fan then expels the heat from the electronic components of the computer.

LGA 1155, also called Socket H2, is a socket used for Intel microprocessors based on the Sandy Bridge and Ivy Bridge microarchitectures. Proprietary Intel features, including Rapid Storage Technology and Clear Video Technology, are supported by the motherboard.

Can you mix and match CPU air coolers and fans?

To an extent, this is possible, but proceed with caution. Any fan built for a specific CPU model should work fine with other processors of the same model. That said, fans and heatsinks are not universal across different models. Higher-powered CPUs generate more heat that needs to be effectively managed. For that reason, make sure that the fan and heatsink are rated for the unit you intend to use.

Does the brand of the fan and heatsink matter?

When it comes to CPU coolers, there are many brands providing parts. Everything is standardized, so as long as you make sure the cooler matches the CPU, you can expect it to work correctly. Any other decision about brands is a matter of personal preference.

Content provided for informational purposes only. eBay is not affiliated with or endorsed by LGA.