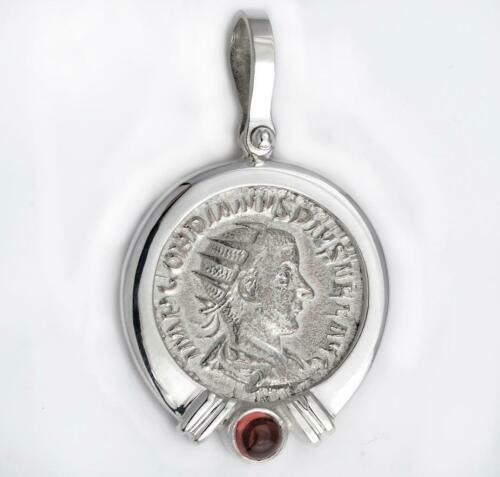 Gordian III was a Roman emperor that ruled from 238 AD to 244 AD. He was the youngest emperor of Rome, crowned at the age of 13. Following the tradition of cutting out coins with the image of the ruling emperor of Rome, during his reign coins of different metals were cut out with his image.

What are the different denominations of the coins?

The denomination of currency is the amount that is behind the coin. In the Roman empire, the currency also had different denominations determining their worth. These are:

What are the different coin compositions?

The coin composition is the metal that it is made of. Coins from the time of Gordian III were cut out from singular metals. Gordian III coins can be purchased as:

What does the face and reverse of these pieces embody?

The face of all of these pieces has the face profile of the emperor of Ancient Rome at that time, who was Gordian III. The reverse has characters and gods of the ancient Roman mythology embodied on it. These include Hercules, Apollo, and Jupiter.

How do you care for antique pieces?

The imperial pieces were created in an early century of the New Era. That is why the test of time has already been placed on them. Knowing how to care for them additionally is important.

Do not hold your piece on the obverse and reverse of it. Always hold it by the edge and not the flat side. Use your thumb and forefinger for this. Using cotton gloves when handling is an additional measure that can be taken. Special holders are available to protect the piece while it is in storage.

Do not polish, clean, or rub the piece. The metals from which ancient pieces are made with are softer than metal alloys, and any cleaning, polishing, or wiping with an abrasive material or chemical will take a toll on the surface of your collectible.