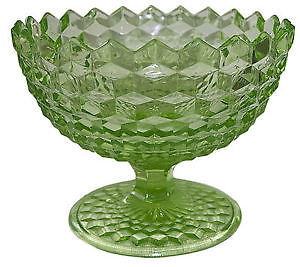 The Fostoria Glass Company is the original creator of Fostoria glass crystal. The line includes many tableware items such as glassware, footed crystal, pitchers, plates, and bowls. The company closed in 1983 after 96 years in business.

What was the Fostoria Glass Company?

Fostoria Glass first produced items like kerosene lamps but soon moved into tableware. It introduced American glassware, including footed versions, in 1915. It soon expanded its line through the Great Depression to include several other crystal products. A few of these included pitchers and candy dishes.

Fostoria began making colored glass items in both casual and footed crystal when it expanded its product line in 1924, creating products similar to Depression glass. The first glassware colors were canary, amber, blue, and green. It introduced additional colors between 1927 and 1933, including:

What types of glass did Fostoria use?

The type of glass used depended on the object being made as well as its intended design. A few of the different types of glass used by Fostoria include carnival, crackle, cut, crystal, opaline, pressed, ruby, milk, depression, and cut-to-clear.

What types of Fostoria glassware pieces are there?

There are too many types of glass objects made by Fostoria to list them all, but a few of their items include:

How many patterns are available in Fostoria glass?

In the early years of the Fostoria company, clear glassware was etched or wheel-cut in several patterns. There are 96 patterns available in both footed and other styles. Glass patterns include:

What styles can you find in Fostoria glassware?

A few of the styles that you can find Fostoria glassware in include American, Gothic, mid-century modern, neoclassical, post-war, colonial, early federal, and Renaissance styles. There are also styles inspired by artistic movement, including art deco, art nouveau, baroque, Chippendale, eclectic, and retro styles.

What other items did Fostoria offer?

It expanded its product line further to include two lines known as the Taffeta Lustre and the Brocaded lines. The Lustre line included candlesticks, console sets, and bowls, while the Brocaded design featured patterns with acorns, summer gardens, and palms.

Content provided for informational purposes only. eBay is not affiliated with or endorsed by Fostoria.