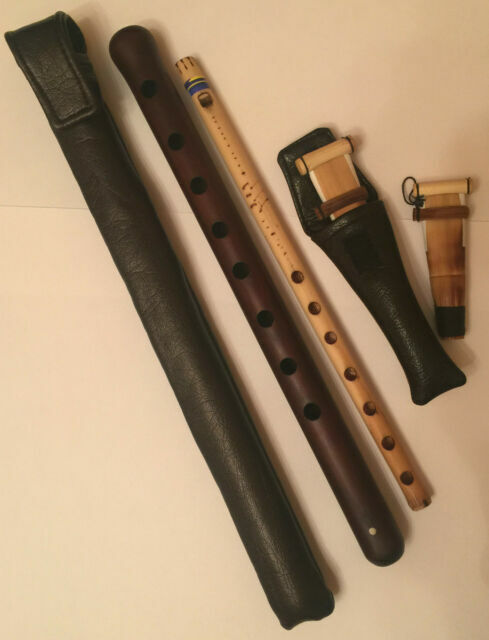 An Armenian duduk is a double reed woodwind instrument that originated in ancient Armenia around 1200 B.C., but versions of duduk are also found in countries like Turkey and Russia. It is usually played in pairs with the first player playing the melody and the second playing a continuous drone called "dum." The sound of the two creates a haunting genre of music often used in the soundtracks of movies and films.

How is an Armenian duduk made?

A duduk comes with a double reed that, depending on the maker and key, creates music sounding more like an English horn than a double windwood. Early versions were made of cane or bone, but more recent ones are frequently shaped from apricot wood, a fitting tribute to Armenias national fruit and symbol. The main parts are the body, reed, cap, and regulator. Traditionally, the instrument has nine finger holes with eight on the front side of the cylinder and one on the opposite side. The body is approximately 350 to 450 millimeters in length, the reed fits into the round hole of the body, and the upper part is flattened. The regulator, or parda, allows the player to alter the pitch. Newer versions have 14 finger holes with eight on the front and six on the back, increasing the range of play. Many options for this classic instrument are available on eBay.

How is the duduk played?

The unique sound of the Armenian dudak is partially created by its use in twos, each of which produces a different tone. The instruments also come in a wide range of keys. When playing, the user holds the instrument at a 40- to 50-degree angle from the body with raised elbows for free breathing. The head and back stay straight. When the player is standing, the right foot goes slightly forward. Crossing of the legs is not recommended for a sitting position because it limits the intake of air. Players use three types of breathing: chest, diaphragm, and a combination of both. Mixed breathing is favored because it allows for the intake of more air and creates better sound.

What kinds of accessories are available?

Duduks come in a variety of models that range from those suitable for professionals to those for students. Professional packages may include reeds, cases for storing and transporting, mouthpieces, and cleaning cloths. A new manufacturing process produces reeds with caps and tuning rings. Duduk/clarinet hybrids can be played with reeds or with mouthpieces. These accessories can be found on eBay.

Special care for a duduk

The Armenian Duduk needs to be oiled occasionally on the outside, but oil should never be placed inside the instrument because it will change the sound. One ancient cleaning method calls for three or four walnuts to be crushed by a hammer inside a tight cloth. The cloth can then be used to wipe the duduk several times. Walnut oil is a good preservative, but almond or any other non-vegetable oil will work. Vegetable oil is not recommended because it becomes rancid. Several options are available for storing, but the most important thing is to avoid liquids, moisture, or heat. Padded cases, such as those for computers or guns, are good for protecting and transporting. Another option is wrapping the instrument with a soft cloth.