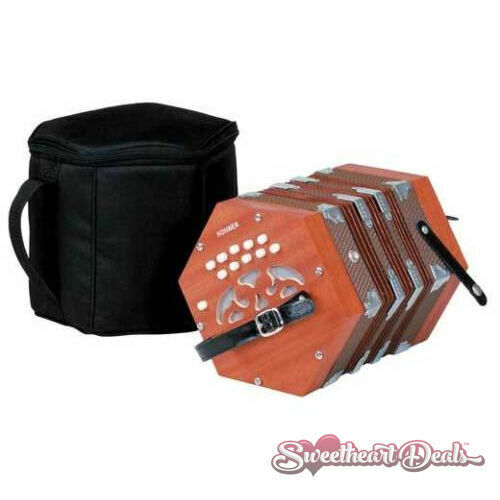 If you want to put on a concert by yourself or mesmerize your family with your mastery of note keys, a concertina might be the instrument for you. Whether you choose an English concertina or a German concertina, eBay is the place to find the accordion-style instrument youre looking for, and there are plenty of colors, styles, and sizes to choose from.

The history of the concertina

The concertina was developed in the 1830s as a joint effort between the music masters of England and Germany. The name "concertina" comes from the ability of this instrument to put on an entire concert by itself. Concertinas were used for both classical and dance music in England and Germany, and these instruments gained more and more popularity throughout the 19th century. When the accordion was developed toward the end of this century, however, German and English concertinas started to lose their popularity.

In the 1960s, the folk revival movement brought with it an increased demand for concertinas, and concertinas are still used in modern folk music to this day. The large collection of this instrument on eBay is a testament to the increase in demand and interest in the concertina.

The components of a concertina explained

Here are the parts that contribute to a concertina:

How many buttons do concertinas have?

Concertinas have varying numbers of buttons, and the number of buttons determines the size of the instrument.

Concertinas generally come with cases. While concertinas themselves are usually hexagonal, cases for concertinas are generally square, and they look like unassuming boxes until you open them with latches. The insides of these cases are usually lined with velvet, and they often have handles for easy storage and transportation from place to place.

How do you pick the right concertina?

If you simply want to learn what a concertina is all about and give it a try, a relatively inexpensive modern-age model might be best. If youre a collector, however, you might want to pick an antique model from Italy or Germany to add more value and diversity to your collection.