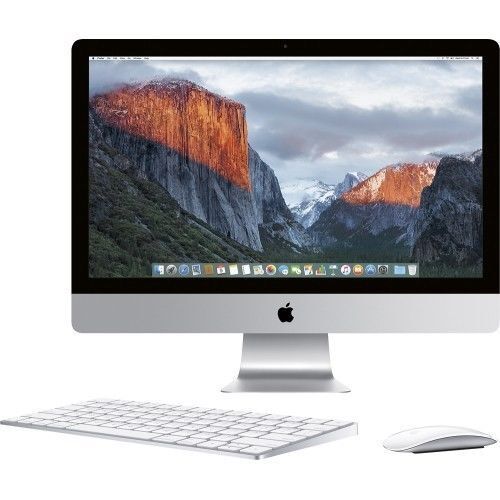 Available since 2010, the 21.5-inch Apple iMac desktops include high-speed Intel Core processors, large displays with Intel graphics for interacting with software, and an intuitive operating system. An all-in-one computer houses every computer component - the processor, RAM, graphics card, and other necessary electronics - in the same case as the monitor instead of having a separate tower and monitor. Find new, used, and preowned iMacs on eBay.

What type of processor comes with an Apple desktop?

Depending on the specific model, the 21.5-inch iMac all-in-one can come with several different types of processor. You may find any of these versions at eBay on a given day. Both Apple and Intel offer processor options for these desktops. The Core i5 and i7 are offered in multiple generations from Intel. The one included with the all-in-one desktop will depend on the year of release. Each of these computer processors runs at specific speeds that are measured in GHz. The amount of GHz is an indication of how fast the computer runs. Sometimes, it can be overclocked to run faster when youre running demanding programs or applications. The Core i5 runs at 2.5GHz. Choices include:

Does this desktop have a Thunderbolt port?

Yes, iMacs manufactured since 2014 have a Thunderbolt 2 port for connecting devices. Its backward-compatible as well, so you can use older devices with the iMacs port. This port provides more speed than its predecessor at up to 20 GB per second.

What are some other features of this computer?

Many models come with the AMD Radeon, which renders realistic 3D images and video smoothly without performance lag because it has its own dedicated memory. Smooth graphics are necessary for editing photos and video and for playing computer games. It comes with a variety of hard drive capacities for storing files securely. Generally, the amounts are offered in 500 GB, 1 TB, or 2 TB capacities. These different sizes allow you to store a large number of photos, music files, and documents and to access them quickly.